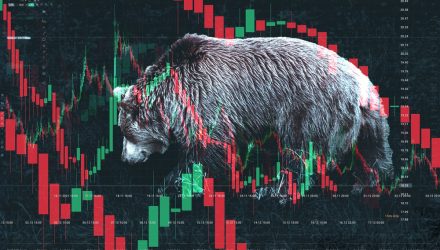 As the U.S. Treasury yield curve flashes a warning signal for the equities market, wary investors could look to bearish or short exchange traded funds strategies to hedge recessionary risks down the line.

Yields on short-term two-year Treasury bonds briefly traded above the yields of benchmark 10-year Treasuries in what is more widely known as a yield curve inversion, fueling fears that this could be the signal of a recession ahead, Reuters reports.

The last time the yield curve inverted was in 2019, and in the following year, the United States slipped into a recession, albeit one caused by the COVID-19 pandemic. Historically, a yield curve inversion has preceded the majority of recessions.

“A lot of people focus on this and there could be a self-fulfilling expectation, they see the 10 year/2 year invert and believe there will be a recession and change behavior,” Campbell Harvey, professor of finance at the Fuqua School of Business, Duke University, told Reuters. “So if you’re a company you cut back capex and employment plans.”

Harvey, who pioneered using the yield curve as a predictive tool for recessions, argued that being prepared for a recession was “not a bad thing… so when it occurs you survive.”

Anu Gaggar, global investment strategist for Commonwealth Financial Network, warned that the lag between curve inversion and a recession historically averaged about 22 months, but has come as early as six months to as late as 36 months for the last six recessions.

“There is definitely a psychological element to it,” Gennadiy Goldberg, senior rates strategist at TD Securities, told Reuters. “The yield curve has worked in the past because it has been a signal that the end of the cycle is coming.”