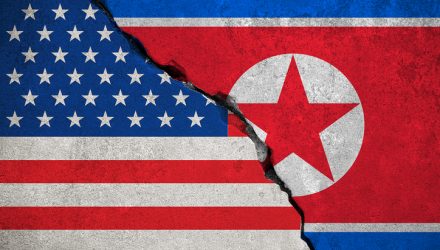 “The market is trying to interpret the CPI data as somewhat positive because it is anticipating that the Fed will be on hold not only in September but also possibly in December,” Robert Pavlik, chief market strategist at Boston Private Wealth, told Reuters. “It clears the field of another possible issue and with that you start to see a little bit of short covering going on.”

Nevertheless, the S&P 500 was on pace to post its largest weekly loss in five months on escalating geopolitical risk amidst saber rattling between the U.S. and North Korea. In his latest warning to Pyongyang, U.S. President Donald Trump said military solutions were “fully in place” and added that American weapons were “locked and loaded” should North Korea act “unwisely.”

“As a portfolio manager, you say, ‘Do I think we’ll get a war out of this?’” Torsten Slok, chief international economist at Deutsche Bank, told the Wall Street Journal. “If the answer is ‘yes,’ then you better get defensive. If you think this is just rattling sabers, and it’s just words, then you could view this as a buying opportunity.”

Related: Smart Beta International ETFs That Have a Handle on Risk

Many traders viewed the spat as a war of words that wouldn’t amount to anything and only provided an excuse for a selloff many considered overdue.

“Given the great run we’ve had, seems like some sort of pullback wouldn’t be surprising,” Michael Baele, managing director of investments at U.S. Bank Private Wealth Management, told the WSJ.