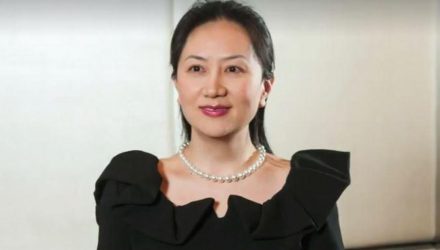 A fresh round of trade troubles dragged on China ETFs after the arrest of a top Huawei Technologies executive at the request of the U.S.

The tentative truce between the U.S. and China trade war was being tested Thursday after the U.S. arrested Meng Wanzhou, Huawei’s chief financial officer and the daughter of the founder of the telecommunications giant, who was arrested changing planes in Vancouver on Saturday, the Washington Post reports.

Meng was arrested on U.S. extradition warrant as Huawei is suspected of trying to evade American sanctions on Iran. U.S. prosecutors have been investigating whether Huawei violated U.S. export and sanctions laws by shipping U.S.-origin products to Iran.

The developments added another wild card to the ongoing trade disputes between Beijing and Washington D.C., which have yet to be officially put to rest. The trade war has led to the imposition of tariffs on almost $400 billion in annual goods shipped between the two countries.