You are at:Home»Equity ETFs»Argentina ETFs: Investors Growing Wary of Risks 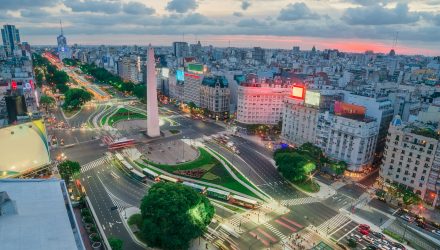 Investors have been pulling out of Argentina ETFs as  a weakening economic outlook and uncertainty over corruption charges deter investment interest.

The $99 million Global X MSCI Argentina ETF (NYSEArca: ARGT), the largest Argentina-related ETF, experienced over $33 million in outflows in August, marking its biggest monthly withdrawal since its inception, Bloomberg reports. Bloomberg also noted that investors have traded 2.3 million shares of ARGT this month, over double the monthly average for the past year.

Dragging on the Argentinian markets, the peso currency has depreciated 40% this year, which put put pressure on inflation and threatened to strangle growth.

“The stock market’s fragility is exposed in the asymmetry of its movements,” analysts at Delphos Investment wrote in a note to clients. “When there are tailwinds abroad, the local gains are fleeting, but when there are headwinds, the selloff is very strong.”

Investors have been pulling out of Argentina since the government took on a $50 billion credit line from the International Monetary Fund in June. Additionally, the weakness in the emerging markets and selling pressure in Turkey and Brazil further exacerbated the sell-off in Argentina.

President Mauricio Macri announced Wednesday that he asked the IMF to push ahead disbursements of its loans to assuage financial concerns, underscoring the country’s need to strengthen the market and soothe fears that it has enough money to fund itself.