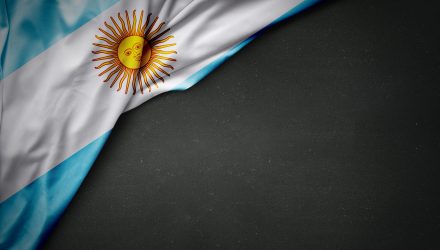 The Global X MSCI Argentina ETF (NYSEArca: ARGT), the largest US-listed exchange traded fund tracking Argentine equities, is down 12.30% over the past month, making it one of the worst-performing single-country ETFs over that period.

Argentina recently procured a bailout package from the International Monetary Fund (IMF), but that only sparked a short-term rally in the country’s financial markets.

ARGT’s recent weakness could be a sign markets are not enthusiastic about Argentina’s new austerity plan.

“On 3 September 2018, Argentine President Mauricio Macri unveiled an austerity plan aimed at stemming recent severe pressure on the peso and reducing the fiscal deficit faster than initially planned under a three-year Stand-by Arrangement (SBA) with the International Monetary Fund (IMF) signed in June 2018,” said Markit. “Macri announced plans to eliminate the primary fiscal deficit entirely in 2019, a significant acceleration versus the 1.3% target initially agreed with the IMF. The radical approach has been forced by extreme peso weakness: this depreciated 15% last week, reflecting growing doubts by investors over the government’s ability to honor sovereign debt commitments due in 2019.”

In an effort to stem the slide in its peso and to rebuff persistently high inflation, Argentina’s central bank recently boosted interest rates to a staggering 60%, among the highest in the world.