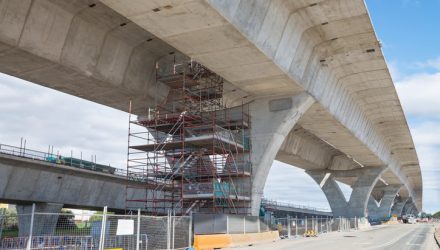 Dating back to the 2016 presidential campaign, infrastructure investments have been receiving renewed attention. That theme is benefiting some ETFs, including the ProShares DJ Brookfield Global Infrastructure ETF (NYSEArca: TOLZ).

The ETF is up nearly 11% year-to-date. Going forward, the allure of infrastructure investing, which investors can easily engage in via exchange traded funds, could and should rise as governments around the world finally commit the capital necessary to upgraded dated and dangerous bridges, pipelines and roads.

Municipalities have capitalized on the record low interest rates by issuing $67.3 billion in debt for infrastructure in the five months through May, the most since 2010. Over the past year, states have also increased spending on public construction to the most since 2010.

TOLZ, which holds nearly 140 stocks, is also a credible income idea as highlighted by a dividend yield of almost 4%. The ETF is a global fund with the U.S. accounting for almost half the fund’s weight. Nine other countries are represented in TOLZ, including a 15.6% weight to Canada.