You are at:Home»Equity ETFs»An Important Streak For Big Bank ETF 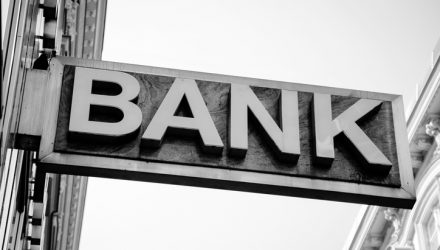 KBE is now flat on the year and remains 7.5% below its 52-week high, which was last seen in the first quarter.

Some market observers attribute sluggish performances in the financial services sector to stringent regulations and the prolonged low-rate environment following the financial depression, which has suppressed net interest margins. Consequently, investors should expect that a tighter monetary policy out of the Federal Reserve and potential rollbacks on depression-era regulations, notably Dodd-Frank, could fuel growth in the financial sector.

“Specifically, KBE put volume closed yesterday at three times the intraday norm, thanks to a big trade at the October 42 put. One trader seemingly bought to open 2,000 of the contracts for 46 cents each, meaning they spent $92,000 to bet on the ETF retreating back below $42 by the close on Friday, Oct. 20, when the series expires,” according to Schaeffer’s.

Financial sector valuations still look relatively cheap, compared to the broader market. The sector’s valuations are still about 25% below the average since the early 1990s.