You are at:Home»Equity ETFs»An Important Signal For a Big Utilities ETF 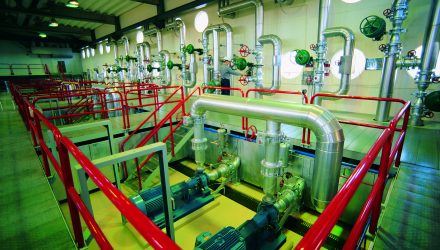 An Important Signal For a Big Utilities ETF

Investors were jittery late in the second quarter, a scenario that boosted some usually conservative sectors, including utilities. While the Utilities Select Sector SPDR (NYSEArca: XLU), the largest utilities ETF by assets, is still sporting a small year-to-date loss, the benchmark utilities fund June in style.

In fact, XLU is in the midst of an impressive winning streak and finished June with a gain of more than 2%. Importantly, XLU moved above its 200-day moving average. A gain on Monday would position XLU for a 10-day winning streak.

“It marks only the third time ever that XLU remained below this trendline for more than six months. The last time the ETF crossed above the 200-day after six or more months was in June 2009, just after the March 2009 bottom. Prior to that, you’d have to go back to April 2003, per data from Schaeffer’s Senior Quantitative Analyst Rocky White,” reports Schaeffer’s Investment Research.

Some market observers believe that heightened market uncertainties, which could appear later this year, could bolster the case for defensive sectors, including utilities.

Recently, Morgan Stanley has upgraded the utilities sector to Outperform, arguing that stock prices aren’t keeping pace with earnings growth so far in 2018, which suggests the market participants may be subtly pricing in slowing earnings growth down the line.