You are at:Home»Equity ETFs»An Exciting China Technology ETF Up 68% YTD 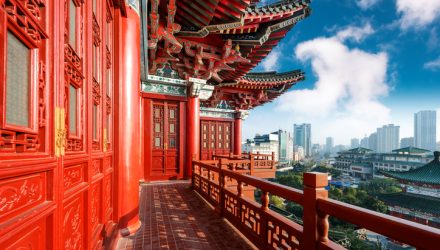 As has been widely documented, Chinese Internet stocks are surging this year, a trend that is benefiting exchange traded funds, such as the Guggenheim China Technology ETF (NYSEArca: CQQQ). In fact, CQQQ is one of this year’s best-performing non-leveraged ETFs with a gain of over 68%.

China has been a world leader in the online commercial retail space as it draws upon its large group domestic consumers and rising middle-income base. Consequently, a China tech-related exchange traded fund has been among the best performers over the past five years and may continue to lead.

Supporting this growth trend in the Chinese technology segment, China overtook the U.S. to become the largest e-commerce or online commercial retail market in the world based on value and is on track to be worth $840 billion in 2021, or almost double the estimate size of the U.S. e-commerce sales in the same period, according to McKinsey data. The e-commerce growth in China exceeds the U.S.’s rate of growth by about four times.

“As of today, China continues to dominate the internet market, as it has more than 720 million users, which is higher in comparison with its counterparts from India and U.S. combined. However, Chinese internet penetration rate is only 53%, which is lower in comparison with its neighbors like Japan and South Korea that have a penetration rate of 93% and 90%, respectively,” according to a Seeking Alpha analysis of CQQQ.