You are at:Home»New ETFs»An ETF That Could Give T. Boone Pickens a Run for His Money 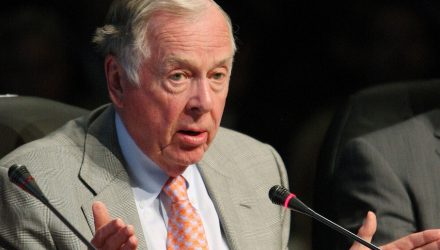 An ETF That Could Give T. Boone Pickens a Run for His Money

TriLine Index Solutions, an affiliate of BP Capital Fund Advisors, is borrowing the name and expertise of oil tycoon T. Boone Pickens as they launch an ETF with an apropos ticker in honor of the business magnate.

On Wednesday, TriLine launched the NYSE Pickens Oil Response ETF (NYSEArca: BOON), which is indirectly controlled by Pickens. BOON has a 0.85% expense ratio.

“BOON was born out of the same idea that ‘Picken’s Plan’ was founded on,” Toby Loftin, Managing Principal at TriLine Index Solutions, told ETF Trends in a call. “It is all about America getting its own resources, or getting off OPEC, specifically.”

The NYSE Pickens Oil Response ETF will try to reflect the performance of the NYSE Pickens Oil Response Index, which tracks companies that are positively correlated with changes in the price of ICE Brent Crude Oil Futures, according to a prospectus sheet. The indexing methodology hopes to provide broader exposure to energy-intensive industries, compared to traditional “energy” indices.

Some investors may be vaguely familiar with this strategy as it was inspired by BP Capital Fund Advisors’ TwinLine Energy Fund.

“We have spent considerable time developing this methodology and are humbled to bring it to the ETF marketplace as an extension of T. Boone Pickens’ legacy,” Loftin said in a note. “We believe this approach better reflects the realities of the changes and future of global energy markets in a post-shale era.”

Sub-industries included in the index cover traditional upstream energy producer, which include Exploration & Production, Oil Services, Refiners and Renewables industries as well as energy consumers for which rising demand for energy may signal an opportunity for growth in revenue, which include a variety of industries such as Aerospace & Defense, Chemicals, Homebuilding, Metal Fabrication, Transportation and Water industries.