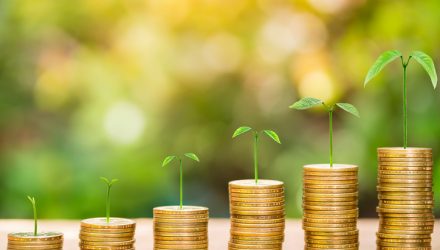 Green bonds are debt securities issued to finance projects that promote climate change mitigation or adaptation or other environmental sustainability purposes. The new breed of green bonds gained momentum in global market ever since the European Investment Bank issued the first green bond in 2007, with $81 billion in green bonds issued in 2016 and an expected $150 billion to be issued in 2017.

“Green bond issuance in 2017 shattered the record from 2016, with both new and repeat issuers helping to satisfy the increasing demand for sustainable bond investments,” said VanEck in a recent note. “Approximately $155 billion was issued by 242 issuers, including 156 first time green bond issuers. Total issuance was 84% higher than in 2016, an illustration of the spectacular growth that the market continues to experience.”

GRNB tracks the S&P Green Bond Select Index, which is “is comprised of labeled green bonds that are issued to finance environmentally friendly projects, and includes bonds issued by supranational, government, and corporate issuers globally in multiple currencies,” according to the issuer.

Green bonds also often feature low correlations to other fixed income assets, a possible advantage for income investors at a time of diverging monetary policies throughout much of the developed world.