You are at:Home»Equity ETFs»An End to BOJ’s Buying Spree Could Limit Japan ETFs Ahead 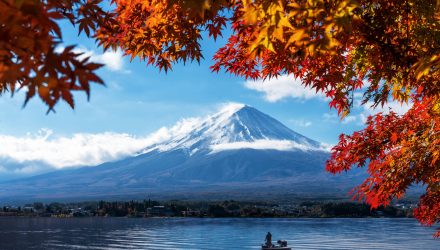 Greater pressure on the Bank of Japan to end its prodigal equity purchases could constrain Japanese equities and country-related exchange traded funds ahead.

Toru Ibayashi, head of Japanese equities at UBS Wealth Management, believes the BOJ will cut its annual buying target for domestic ETFs by as much as a third from the current 6 trillion yen, or $53 billion, Bloomberg reports.

“Four trillion yen,” UBS’s Ibayashi predicted. “And everybody will understand.”

As the economy strengthened since July last year when the central bank doubled its ETF buying spree, more investors are taking in profits in response to Japanese equities hitting their highest in 26 years.

“Fear of deflation was behind the 6 trillion yen target,” Daiwa SB’s Monji told Bloomberg. “We’re no longer in that kind of environment. Risks are now skewed toward the upside, rather than the downside. It’s hard for the central bank to justify its buying spree.”

The BOJ’s ETF buying spree that started in 2010 was part of an unprecedented stimulus package aimed at revitalizing the economy. The central bank has acquired $150 billion in Japanese ETFs as of December 8 and accounted for 74% of the market at the end of October, compared to 65% a year earlier.