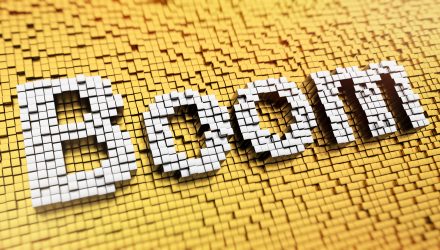 Emerging markets are enjoying improved fundamentals thanks to corporate earnings improving as economic growth rebounds and strengthening currencies against the U.S. dollar on the back of improved economic outlooks. This year, investors have been flocking to emerging markets exchange traded funds, including the iShares Core MSCI Emerging Markets ETF (NYSEArca: IEMG).

IEMG debuted just over five years ago as the low-cost alternative to the iShares MSCI Emerging Markets ETF (NYSEArca: EEM). With investors increasingly prioritizing fees in the ETF evaluation process, IEMG’s status as a cost-effective avenue to emerging markets stocks has helped the fund grow at a blistering pace.

IEMG “was designed to go toe-to-toe with Vanguard’s offering. It tracks a slightly broader index, the MSCI Emerging Markets Investable Markets Index, and charged a competitive 0.18% fee,” said Morningstar. “The response was effectively an attempt by BlackRock to have its cake and eat it, too. Rather than slashing the fee on its existing multibillion-dollar fund and forgoing millions in fee revenue, it was splitting its current and prospective clientele in two.”

Today, IEMG charges 0.15% per year, slightly more than 0.14% annual fee on the Vanguard FTSE Emerging Markets ETF (NYSEArca: VWO). Many of this year’s top asset-gathering ETFs have annual fees below 0.2%, including IEMG and VWO. In fact, just three ETFs have larger 2017 inflows than the $15.7 billion added by IEMG.

“From October 2012 through September 2017, IEMG saw $32.4 billion in net new flows, the Vanguard ETF $3.6 billion, and EEM experienced $1.8 billion in outflows, said Morningstar. “These numbers seem to indicate that long-term investors 1) are a fee-conscious bunch and 2) aren’t about to allow asset managers to have their cake and eat it.”