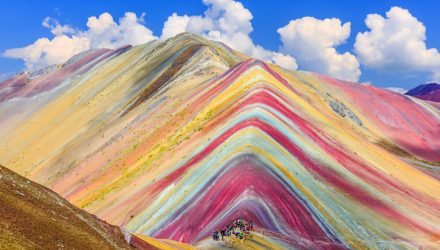 The iShares MSCI All Peru Capped ETF (NYSEArca: EPU) is trading higher to start 2018 even as political risks linger in the fast-growing South American economy.

EPU, the only US-listed exchange traded fund dedicated to Peruvian stocks, has been rallying since mid-December after President Pedro Pablo Kuczynksi narrowly escaped impeachment. The opposition called for an impeachment vote after Kuczynski, a former Wall Street banker who worked at the World Bank and International Monetary Fund, admitted his ties to scandals surrounding Brazilian construction firm Odebrecht after the president formerly denied any links. The admission roiled markets.

“A political crisis boiled over in December 2017 when President Pedro Pablo Kuczynski abruptly pardoned former President Alberto Fujimori three days after Kuczynski barely maintained office in a rapid impeachment vote on December 21,” according to Fitch Ratings. “The pardon generated peaceful public protests across Peru, prompted the resignation of ministers and top advisors and alienated a segment of the president’s electoral base, weakening the president’s political mandate. His approval rate was 25% at year end, according to an Ipsos poll.”

Peru is growing at a faster clip than some of the larger Latin American economies, but that growth could be challenged if political instability ebbs higher.

“However, political tensions between President Kuczynski and the Fujimoriista-led congress pose governability challenges and have paralyzed the prospect for major judicial, labor or pension reforms,” said Fitch. “Although recovery in the mining industry should lift growth to a degree, Fitch expects to revise the economic growth forecasts for 2018 and 2019 lower than the 4.0% and 3.4%, respectively, expected in early December.”

The $191.1 million EPU tracks the MSCI All Peru Capped Index and holds 27 stocks, about half of which hail from the materials sector. That trait underscores the Peruvian economy’s dependence on mining. Specifically, Peru is a major producer of copper, gold and silver, among other commodities. Higher prices for those commodities could drive upside in Peruvian stocks and EPU this year.