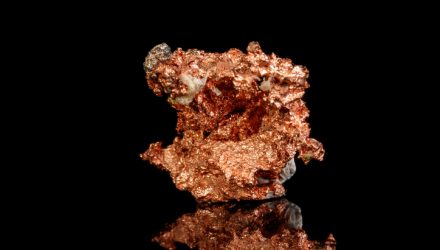 Why This Copper ETN Could be Ready to Rally

The United States Copper Index Fund (NYSEARCA: CPER) and the iPath Series B Bloomberg Copper Subindex Total Return ETN (NYSEArca: JJC) are trading modestly higher to start the year, the pair copper exchange traded products could have some upside in store if some market observers’ proclamations about the red metal’s prices prove accurate.

Chilean Mining Minister Baldo Prokurica believes ebbing of trade tensions between the U.S. and China will lift copper prices. A skeptical view of those comments is that Chile is the world’s largest producer of the red metal and China is the biggest copper buyer, meaning it behooves Prokurica to be a copper bull.

“Copper prices may rally to $3 a pound, from an average of about $2.72 last year, as Washington and Beijing work to resolve their trade dispute that has ushered in a ‘complex period’ of economic uncertainty, hurting industrial demand for the metal,” said Prokurica in an interview with Bloomberg.

In addition to trade tensions last year, copper prices slipped on softening global economic data. The base metal is a major component in many industries, including construction, and is widely seen as a barometer for global economic health.

“A resolution to the trade dispute may prompt buyers including China to rebuild their stockpiles, helping fuel the rebound in prices, Prokurica said. Inventories tracked by exchanges in Shanghai, London, and New York have shrunk by more than a third in the past six months,” according to Bloomberg.

ETF investors sensing an opportunity in copper can also gain exposure to the metals and mining space through miner-related ETFs, such as the SPDR Metals & Mining ETF (NYSEArca: XME), which is designed to track the broad metals and mining segment, and the Global X Copper Miners ETF (NYSEARCA: COPX), which takes a more focused approach to copper min