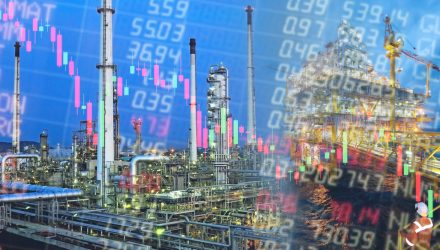 The United States Oil Fund (USO) is one of the most heavily traded commodities exchange traded products and amid this year’s oil market rout, USO is reigning as one of 2020’s most controversial ETPs as well.

Much of that controversy stems from USO entering the year structured to track front month West Texas Intermediate (WTI) futures only to change its objective to feature further out contracts as the oil market was punished amid the coronavirus meltdown. Making matters worse, in April, USO’s issuer ran into the problem of not being able to issue new shares.

That hasn’t prevented the oil product from posting a second-quarter gain of 25.70%, but when ETPs, regardless of what the underlying asset is, can’t issue new shares, they risk trading at significant premiums to their net asset values (NAV). That creates a scenario whereby the market price of the product can jump to artificially high levels, potentially exposing investors to a significant downside as the situation is corrected.

On Friday, it was revealed that the Securities and Exchange Commission (SEC) will allow USO’s sponsor to issue another 1 billion new shares of the product.

“The Securities and Exchange Commission approval comes nearly 8 weeks after the United States Oil Fund said that it issued all remaining registered shares, a move driven by the tremendous interest in the sector as crude prices plunged into negative territory for the first time in history,” reports Bloomberg. “In that period, it’s been subject to limits from the world’s biggest commodity exchanges, had to find new brokers, and even found itself subject to regulatory investigations.”

The news comes after some recent bullishness in the energy patch due to news that OPEC is reining in production even as prices rebound. USO entered Friday with $4.9 billion in assets under management, making it one of the largest non-gold commodities ETPs.

Despite optimism from investors, more expensive crude costs without corresponding gains for the product refineries are selling implies that demand growth is lagging growth in prices, and could push refineries to purchase lower crude volumes, resulting in a drop in oil prices.

USO “came under close scrutiny as oil’s rapid plunge forced it to quickly shift some of its giant positions on short notice. While West Texas Intermediate crude is down about 40% so far this year, USO has lost more than 70% of its value, becoming unhinged from tracking just the front-month futures contract due to restrictions from various regulators and brokers.” according to Bloomberg.