You are at:Home»Alternatives Channel»U.S. Dollar ETFs Stage a Comeback After Tumultuous Month 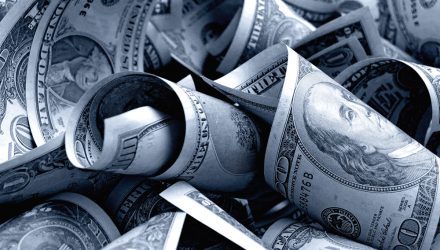 The U.S. dollar and related exchange traded funds have experienced a turbulent month, swinging back to a positive gain as companies and investors dipped into the greenback for shelter.

On Tuesday, the Invesco DB US Dollar Bullish (NYSEArca: UUP) rose 1.5% and WisdomTree Bloomberg U.S. Dollar Bullish Fund (NYSEArca: USDU) increased 6.6%. Meanwhile, the Dollar Index (DXY), which tracks the greenback against a basket of its peers, was up 1.4% to 99.46.

The USD initially plunged in early March as U.S. government bond yields retreated, but the dollar has since rebounded. Against a basket of major currencies, the greenback is now up around 5% since the March 9 low.

Investors are looking for the Federal Reserve to bolster the commercial paper market, which many companies rely on for short-term loans, and for the Trump administration to launch a new fiscal stimulus.

“You can see a scramble for short-term dollar liquidity,” Kit Juckes, a strategist at Société Générale, told the Wall Street Journal. “There isn’t a shortage but there are clearly some people who need dollars right now and the system will take some time to cope.”

The Fed said it coordinated with five other central banks to make U.S. dollars available overseas at near-zero interest rates through the so-called swap lines program, diminishing the strains in the offshore market for dollar funding. To encourage overseas banks to finance in dollars through these swap lines, the Fed will lower the interest rate by a quarter of a percentage point and it will extend the maximum length of time in which banks can borrow to 84 days from one week.

“There is demand for dollar liquidity everywhere. The swap lines are addressing the demand for the banking sector. Many companies were not using the banking sector for their liquidity, so the Fed needs to do something to address this part of the liquidity squeeze,” Athanasios Vamvakidis, head of foreign-exchange strategy at Bank of America Global Research, told the WSJ.