You are at:Home»Alternative ETFs»US Dollar ETFs Show Strength With Greenback at 2-Year High 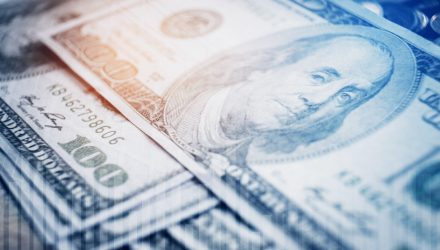 US Dollar ETFs Show Strength With Greenback at 2-Year High

U.S. dollar-related ETFs continued to rally, with the greenback pushing toward its highest level in over two years, as global uncertainty pushed global investors to the more attractive U.S. markets.

Year-to-date, the Invesco DB US Dollar Bullish (NYSEArca: UUP) increased 5.6%, and the WisdomTree Bloomberg U.S. Dollar Bullish Fund (NYSEArca: USDU) rose 4.1%. Meanwhile, the ICE Dollar Index, which tracks the greenback against a basket of its peers, hit its highest level since mid-2017 on Tuesday.

The U.S. dollar strengthened Tuesday as the British pound slipped to a new multi-year low, following Prime Minister Boris Johnson’s defense of his Brexit plans, while China’s yuan currency slipped to its weakest in 11 years, the Wall Street Journal reports.

“There is a very widespread demand for dollars outside of the U.S. borders,” Jane Foley, a currency analyst at Rabobank, told the WSJ. “So the dollar behaves like a safe-haven, and it retains this core demand when risk appetite is low.”

The uncertainty over an escalating trade war between the world’s two largest economies has weighed on global exports for many major exporting countries, like South Korea and Japan to Germany.

Meanwhile, the growing amount of negative-yielding assets abroad have pushed foreign investors to the relatively more attractive U.S. Treasuries. Investors have also grown increasingly worried about the prospects of European markets in recent weeks after rising uncertainty over Italy’s political climate and Germany’s weakening economy that could slip into a recession.

Related: U.S. Dollar ETF Has Some Doubters – Here’s Why…

“It is just the least ugly sister at the moment,” Esty Dwek, a strategist at Natixis Investment Managers, told the WSJ. “There is some safe-haven demand still because of the tariffs and the global growth [concerns].”

The U.S. dollar has continued to appreciate against global currencies despite President Donald Trump’s call to devalue the greenback and the Federal Reserve’s looser monetary policy outlook. The U.S. central bank, though, has been slower to address interest rate cuts, as compared to other world central banks.

The Fed has been “slow off the mark” in bringing down borrowing costs, Foley added. “Other central banks have been much more proactive.”