You are at:Home»Alternatives Channel»U.S. Dollar ETFs Have Been on a Winning Streak 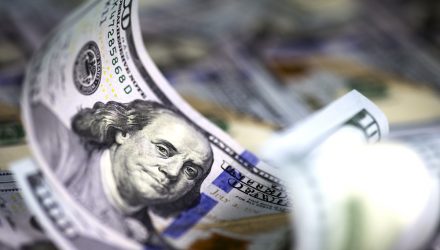 U.S. Dollar ETFs Have Been on a Winning Streak

U.S. dollar-related ETFs have been on a winning streak, with the greenback hitting a four-month high against the euro, as safe-haven demand and a more bullish outlook on the U.S. economy helped lift the USD.

Year-to-date, the Invesco DB US Dollar Bullish (NYSEArca: UUP) increased 2.8%, and the WisdomTree Bloomberg U.S. Dollar Bullish Fund (NYSEArca: USDU) rose 2.3%. Meanwhile, the Dollar Index (DXY), which tracks the greenback against a basket of its peers, hit its highest level since October 2019.

Investor fear over the spreading coronavirus in China, which has claimed over 900 lives so far, and the potential negative global economic impact has driven increased demand for safe-haven assets.

Meanwhile, in the United States, relatively strong economic data, with a recent jobs report revealing the U.S. employment accelerated in January, has further strengthened the attractiveness of U.S. assets.

“We had much stronger-than-expected U.S. data, coupled with much weaker-than-expected eurozone data,” Win Thin, global head of currency strategy at Brown Brothers Harriman, told Reuters. At the same time, “we have the safe-haven bid from the coronavirus. That is killing EM and really benefiting the dollar, and to a lesser extent the yen and Swiss.”