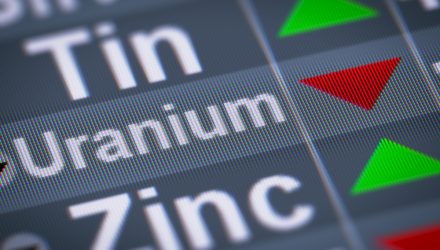 The Global X Uranium ETF (NYSEArca: URA), the original ETF dedicated to uranium equities, jumped more than 24% in the second quarter as uranium extended its run as one of this year’s steadier commodities.

“A key benchmark for commodities performance has lost about 20% halfway through the year, with the energy sector leading the decline as the pandemic ravaged demand for petroleum. Uranium, though, stands out as a resilient performer that’s likely to continue to do well in the second half of 2020,” reports Myra Saefong for Barron’s.

“Still, the biggest gainer among major commodities may come as a surprise as it is also related to the energy sector. Uranium, which is used as fuel for nuclear reactors, has seen futures prices climb about 30% this year,” according to Barron’s.

While alternative energy contains grabbing market share from fossil fuels, nuclear energy isn’t falling by the wayside and that’s a plus for URA.

“Demand for nuclear power hasn’t dropped dramatically due to COVID-19 as most reactors operate as baseload power suppliers and are usually the last to be taken off the grid,” says Jonathan Hinze, president of nuclear-fuel consultancy UxC,” in an interview with Barron’s.