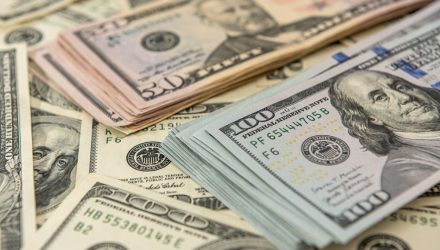 U.S. Dollar ETFs Have Been a Stable Ballast in a Volatile Market

The U.S. dollar and related exchange traded funds continued to strengthen against international currencies, reflecting the ongoing demand for U.S. assets like Treasuries, whose yields have jumped this year, and the shift toward safety amid growing global concerns.

UUP tracks the price movement of the U.S. dollar against a basket of currencies, including the euro, Japanese yen, British pound, Canadian dollar, Swedish krona, and Swiss franc. The actively managed USDU tracks the USD against a broader basket of developed and emerging market currencies including China, India, South Korea, Switzerland, Australia, Mexico, the United Kingdom, Canada, Japan, and Europe.

“There’s a broad selloff happening, and people want to buy the dollar because it is a safe haven,” Alvin Tan, head of Asia foreign-exchange strategy at RBC Capital Markets in Singapore, tells the Wall Street Journal.

The strength of the U.S. dollar reflects the increased wariness among investors over riskier assets. Equity markets across many parts of the world have plunged as concerns over slowing global growth and the rapid rise of inflation, along with the risk that aggressive monetary policy changes by the Federal Reserve could bring the U.S. economy into a recession.

“Currencies are being whipsawed by fragile sentiment,” Wai Ho Leong, a strategist at Modular Asset Management, a Singapore-based hedge-fund manager, tells the WSJ.

Tan noted that emerging-market currencies such as the offshore Chinese yuan, the Brazilian real, and the South African rand were among those taking the brunt of the beating on Thursday, following data released that showed U.S. consumer prices rose by a quicker-than-expected 8.3% in April year-over-year, which should keep pressure on the Fed to maintain course and enact multiple interest rate hikes.