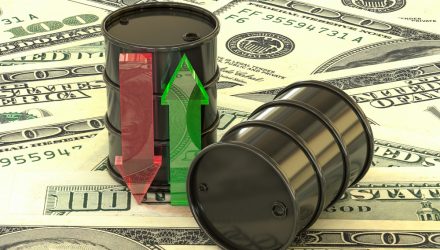 After enduring a volatile first half of 2020, more of the same could be in store oil prices and exchange traded products in the second half of the year as the demand picture remains murky.

“The International Energy Agency said on Friday in its monthly report that oil demand was higher than expected in the second quarter of the year, but that rising Covid-19 cases in parts of the world threaten the second-half recovery,” reports Avi Salzman for Barron’s.

As states begin to reinstate restrictions on movement, fuel demand will likely fall in a slower economic recovery ahead. Data from the U.S. Energy Information Administration also revealed that U.S. gasoline stockpiles fell by a much more-than-expected 4.8 million barrels last week while demand hit its highest level since March 20.

“But the second half of the year is looking murkier because the U.S. and other countries have failed to contain the coronavirus and areas are now being forced to slow the reopening. Unless current trends reverse, the agency’s next update is more likely to be negative than positive,” reports Barron’s.

The United States saw over 60,000 new COVID-19 cases on Wednesday, the biggest single-day increase by any country. Coronavirus cases have been increasing in 42 of the 50 U.S. states over the past two weeks.

“The IEA increased its prediction for global oil demand this year because the second quarter was not quite as bad as feared. The agency now predicts that demand will fall by 7.9 million barrels this year to 92.1 million barrels a day, an improvement of 400,000 barrels from its last forecast,” according to Barron’s.