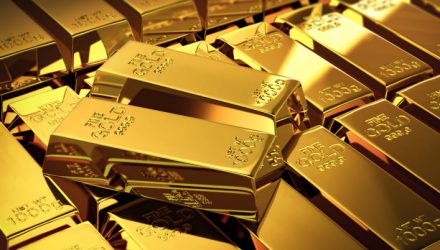 The Direxion Daily Gold Miners Index Bull 3X Shares (NUGT), one of the most heavily traded leveraged exchange traded funds, is on a tear. NUGT is up 13.45% over the past week and higher by more than 45% this month, prompting some market observers to speculate the fund could be poised for a breather.

NUGT seeks daily investment results, before fees and expenses, of 300% of the daily performance of the NYSE Arca Gold Miners Index, according to the fund’s fact sheet. “The NYSE Arca Gold Miners Index (GDMNTR) is a modded market capitalization weighted index comprised of publicly traded companies that operate globally in both developed and emerging markets, and are involved primarily in mining for gold and, to a lesser extent, in mining for silver.”

Some traders believe NUGT could be in for a near-term decline, which could bring opportunity with NUGT’s bearish counterpart, the Direxion Daily Gold Miners Bear 3x Shares (NYSEArca: DUST).

“First, consider that last week’s gain for the ETF, totaling 5.8%, was its third consecutive weekly advance — marking NUGT’s longest weekly win streak since around the time of the stock market’s late-December lows,” according to Schaeffer’s Investment Research. “As a result, the bullishly leveraged ETF notched a Friday close above its descending 80-week moving average for the first time since the week prior to the November 2016 U.S. presidential election. Previously, this long-term trendline had acted as stiff resistance for all NUGT rally attempts since February.”

DUST seeks daily investment results before fees and expenses of 300 percent of the inverse of the daily performance of the NYSE Arca Gold Miners Index. The fund invests in swap agreements, futures contracts, short positions or other financial instruments that, in combination, provide inverse or short leveraged exposure to the index equal to at least 80% of the fund’s net assets.

“What’s more, NUGT intensified an ongoing assault on its 320-day moving average,” notes Schaeffer’s. “The fund closed four straight days above this level for the third time in 2018, and has closed eight of the last nine trading days above this trendline. Again, the leveraged gold mining tracker hasn’t enjoyed a streak like that above its 320-day since the fourth quarter of 2016.”

While NUGT may look due for a pullback, geopolitical headlines could give the ETF the fuel it needs to keep surging.

“In the short term, any sentiment-rattling headlines regarding Iran, trade, or the Fed’s future rate path could easily — but, perhaps, surprisingly to some — give NUGT the momentum boost needed to extend its fledgling breakout above long-time resistance levels,” according to Schaeffer’s.