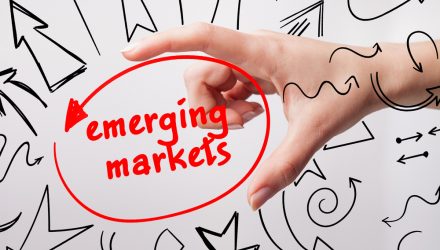 Currency exposure always matters with emerging markets bonds and the related ETFs, such as the VanEck Vectors Emerging Markets Local Currency Bond ETF (NYSEArca: EMLC), but the importance of currency is taking on elevated importance this year.

“At current valuations, we expect that emerging markets local currency bond returns will primarily be driven by currencies for the remainder of the year,” said VanEck head of fixed income Fran Rodilosso in a recent note. If global growth shows signs of recovery and the simulative efforts of emerging markets central banks are successful, emerging markets currencies (EMFX) may rally from here as risk appetite and the search for yield re-emerges.

EMLC holds over 300 bonds and has a 30-day SEC yield of nearly 5.40%, which is well above what investors find on essentially domestic, investment-grade bond instruments.

Declining interest rates in the U.S. and expectations that the Federal Reserve will continue lowering rates to prop up the economy could be a catalyst for EMLC. Emerging markets bonds, particularly those denominated in local currencies, are often levered to Fed action because lower U.S. rates can depress the dollar, thereby bolstering emerging markets currencies and assets denominated in those currencies.

However, the coronavirus is throwing that scenario for a loop because investors seek safe-haven assets, of which the dollar is one. A strong greenback has been punishing emerging currencies this year. Still, EMLC is performing only slightly less poorly than a basket of dollar-denominated emerging markets bonds year-to-date. However, EMLC could rally if oil prices rebound.

“One result of lower rates amidst the current risk-off environment has been a steep decline in the values of many emerging markets currencies, particularly those of oil exporters such as Mexico and Russia,” said Rodilosso. “In terms of real effective exchange rates, which account for changes in price levels and the balance among a country’s trading partners, the average valuation of emerging markets currencies has not been this low since 1999 and is well below historical averages.”

Additionally, markets may be pricing more risk to emerging markets assets than will actually comet to pass.

“As opposed to previous episodes of risk aversion and capital outflows, we believe external vulnerabilities are reduced for many countries, foreign currency reserves are higher and the downside risks to growth appear to outweigh inflation pressures for now,” said Rodilosso.