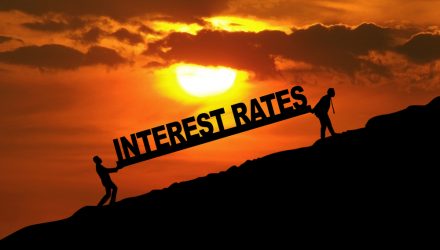 An interest-rate hedging exchange traded fund strategy is leading the charge Monday ahead of the Federal Reserve’s expected series of rate increases beginning this week.

Traders are betting on an even more aggressive Fed rate hike schedule in response to inflation levels that are near four-decade highs. Contracts tied to the Fed’s policy rate show bets on interest rates increasing to a range of 3% to 3.25% by the end of the year, Reuters reports.

The Fed may be seen as covering all bases after being burned several times over the past two years in its view of short-term inflation pressures that stubbornly persisted.

“We want to see actual progress on inflation,” Fed Chair Jerome Powell says just over a week ago, highlighting possible sustained upward inflation pressures caused by the war in Ukraine and recent COVID-19 lockdowns in China, which have contributed to supply chain issues. “It may be that the actual peak was in March but we don’t know that and so we’re not going to count on it.”

Powell even says that once the Fed hits a neutral rate, the central bank may even continue to tighten credit even further to a point that would restrain growth “if that turns out to be appropriate,” the Associated Press reports.

As investors try to react to changes in the monetary policy outlook, some have turned to PFIX, which seeks to hedge interest rate movements by increasing long-term interest rates. The fund also benefits from market stress when fixed-income volatility increases, while still providing the potential for income. PFIX utilizes an institutional-level strategy while bundling it in an ETF wrapper that provides both attractive liquidity and tax efficiency.

PFIX holds a large position in over-the-counter (OTC) interest rate options with the intention of providing a direct and transparent convex exposure to large upward moves in interest rates as well as interest rate volatility. By using OTC derivatives which are typically only available to institutional investors, the fund is similar to owning positions in long-dated out options on 20-year U.S. Treasury bonds. Because the option is held over a longer duration, PFIX can provide a transparent and simple interest rate hedge.