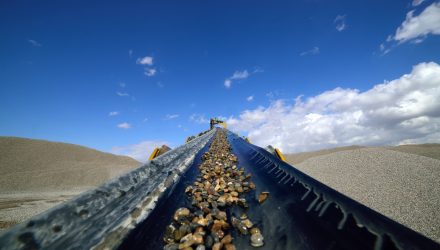 Gold would be a good answer, but it’s wrong. After Monday, the best-performing commodity on a year-to-date basis is uranium and that could finally give rise to the Global X Uranium ETF (NYSEArca: URA) and the North Shore Global Uranium Mining ETF (NYSEArca: URNM).

URNM, which launched last December, offers efficient access to a global basket of companies in the uranium industry. This fund offers a thematic play on potential nuclear power demand growth and uranium supply deficits. The ETF tracks the North Shore Global Uranium Mining Index, which is a focused uranium mining index. The index holds both miners and holders of physical uranium. It is currently tilted towards junior miners.

“The radioactive metal used in nuclear fuel has climbed 31% this year, making it the world’s best-performing major commodity,” reports Bloomberg. “The gains have been spurred by mine shutdowns that have wiped out more than a third of annual global output at a time when demand from power plants has remained relatively stable.”

“While demand for energy, including nuclear, is taking a hit due to the pandemic, many atomic power plants are expected to keep open. That’s partly because coal- and gas-powered plants are easier to turn on and off than nuclear facilities, so it’s worth keeping them running even if electricity demand declines somewhat,” according to Bloomberg.

“In response to low prices, two industry giants, Kazatomprom and Cameco Corp., have been curtailing uranium production in the past three years to reduce the global glut,” reports Bloomberg. “The COVID-19 crisis has accelerated that process with a jolt. Kazatomprom, the largest uranium producer, announced earlier in April it was reducing operational activities at its uranium mines in Kazakhstan for about three months.”