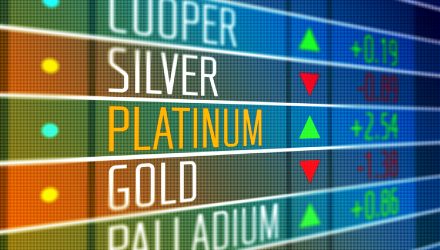 The Opportunity Available With Platinum

The  Aberdeen Standard Platinum Shares ETF (NYSEArca: PPLT) may not be getting the attention its gold counterparts are this year, but some data points indicate the gold rival is offering value and potential upside.

PPLT seeks to reflect the performance of the price of physical platinum, less the expenses of the Trust’s operations, and is designed for investors who want a cost-effective and convenient way to invest in platinum with minimal credit risk.

“Production price of platinum is approximately $1,100 per ounce which is significantly higher than the current market price. Due to a near halt in the economy including automotive manufacturers which use 40% of the platinum supply for catalytic converters,” according to Monumental Property Group.

Platinum is viewed as more cyclical than gold and its industrial demand components has been a disadvantage this year due to the onset of the coronavirus. The benefit is it’s opening the door to a value play.

Earlier this year, platinum prices jumped on supply-side concerns after Amplats, the world’s top platinum producer, cut output projections to between 3.3 and 3.8 million ounces of platinum group metals, or 900,000 short of its previous guidance of between 4.2 and 4.7 million ounces, Mining.com reports.

“Platinum is a great way to bet on the car industry rebound without having any auto company-specific default risk. In 2008 the price of platinum crashed with the banking crises and then soared the following year to over $1,600 an ounce. We foresee a similar set of circumstances during the present crisis,” said Ike Roberts of Monumental Property.