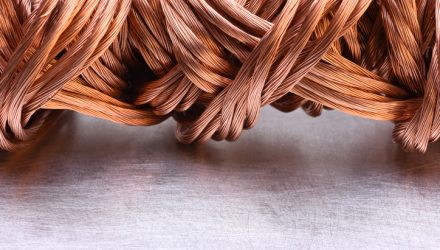 The iPath Series B Bloomberg Copper Subindex Total Return ETN (NYSEArca: JJC) is having a rough go of things, but that pressure could soon ebb. This month, the copper exchange-traded note is lower by more than 4%, putting it about 12% below its 52-week high.

That means JJC meets the definition of a correction, but that correction could soon be, well, corrected as tight supplies potentially boost copper prices.

“Copper recently touched its lowest price level in more than two years, reflecting investors’ worries about muted economic growth and the temperamental trade dispute between the U.S. and China,” reports Myra Saefong for Barron’s. “As supplies of the red metal tighten, however, analysts think commodities traders could overcome concerns about the economy, prompting copper prices to move higher.”

“Sentiment for copper, however, could turn bullish because demand fundamentals show strong support for higher prices,” according to Barron’s. “Basing his estimates on reported figures, Matt Badiali, senior research analyst at Banyan Hill Research, thinks that the world will need to produce 5 million metric tons of copper per month by 2030—about 2.5 times more than it will produce this year—in order to meet projected demand from the electric-vehicle industry.”

A supply deficit is also brewing and those deficits usually spark upside in precious and industrial metals.