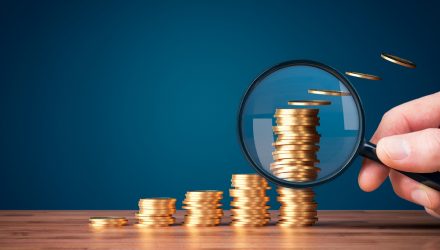 Senior loans, also known as bank loans or leveraged loans, aren’t entirely immune to the downdraft in the fixed income market this year. However, many of the exchange traded funds addressing this asset class are performing less poorly than broader bond strategies.

That could signal an opportunity with the Virtus Seix Senior Loan ETF (SEIX). Senior loans are typically non-investment grade fare, but the asset class historically performs well as interest rates rise owing to its exposure to floating rate notes (FRNs). Indeed, rates are rising and that could enhance the near-term allure of SEIX for income investors.

“Many investors are turning to bank loans, also known as floating-rate loans, which are debt instruments whose coupon is linked to a short-term interest rate like LIBOR or SOFR. Given the floating rate nature of the asset, adding bank loans to your portfolio can lower duration and increase potential income as the Fed looks to continue raising short-term interest rates to combat the recent surge in inflation,” according to BlackRock research.

For investors new to leveraged loans, the ETF wrapper as offered by SEIX is pertinent because this is a segment of the bond market that requires some education. Said another way, investors considering SEIX should understand why this fund could be durable as rates rise.

“The ‘floating’ coupon feature reduces interest rate sensitivity for bank loans which has contributed to the asset classes’ historical outperformance relative to ‘fixed’ income assets in rising rate environments,” added BlackRock. “The ‘floating’ component of a bank loan resets periodically and will dictate when investors realize the benefit of rising rates. Coupon rates are initially set when a bank loan is issued, comprised of a benchmark interest rate (historically LIBOR and, going forward, SOFR) plus a credit spread.”

SEIX, which turned three years old in April, offers some other advantages, including its status as an actively managed fund. While senior loans gain acclaim for reduced interest rate sensitivity and high yields, critics aren’t shy about highlighting potential credit quality and liquidity issues in this corner of the bond market.

As an actively managed fund, SEIX focuses on BB- and B-rated loans and it can leverage active management to avoid potential defaults while identifying value and higher quality credit opportunities. SEIX charges 0.57% per year, or $57 on a $10,000 stake.