You are at:Home»Alternatives Channel»Separating Fact From Fiction With Gold ETFs in Times of Crises 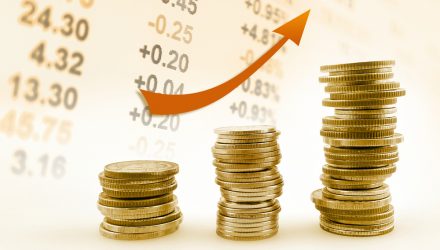 Separating Fact From Fiction With Gold ETFs in Times of Crises

Gold and ETFs, such as the  SPDR Gold Shares (NYSEArca: GLD)  and the SPDR Gold MiniShares (NYSEArca: GLDM), finished the first quarter with solid gains, but amid the March spike in equity market volatility, some investors became concerned about the veracity of bullion as a safe-haven asset.

Gold weakness in March wasn’t the first time the yellow metal joined stocks on the downside – it happened during the financial crisis – but gold is actually behaving as expected.

“Essentially, gold has been doing what it is supposed to do in this sort of environment,” said George Milling-Stanley, chief gold strategist at State Street Global Advisors, in a recent note. “There was massive selling across all financial markets as the rapid spread of COVID-19 raised the specter of a global recession, and gold suffered along with everything else. Based on my discussions, investors indicated that they were selling anything they could to raise money, often to meet calls for additional cash when stocks they had purchased on margin plunged in value.”

Going back to the 2002 recession and the 1987 market crash, there is evidence to suggest that gold can follow stocks lower, but that doesn’t mean the scenario is permanent.

“Similar things happened during the 2002 recession, and even further back in the aftermath of the 22% drop in equities on Black Monday in 1987,” notes Milling-Stanley. “Equities took a big hit and remained at lower levels for months, while gold dipped initially on margin call liquidation but quickly regained its equilibrium and moved on to even-higher territory.”

As the coronavirus outbreak continues to be the wild card in the markets, the safe haven of precious metals is in high demand, especially for exchange-traded funds (ETFs) that are backed by gold. ETFs have been stockpiling gold as more coronavirus news continues to invade the financial markets.

What’s important in tumultuous times like these is that investors remember that gold, particularly in physical or ETF form, is a long-term investment that’s a store of value.

“It is worth pointing out that the importance of gold’s role as a store of value has steadily increased since the beginning of the free market for gold in the early 1970s,” said Milling-Stanley. “In each of the periods of crisis discussed above, the gold price was higher in the year after the crisis than it was during the year before the crisis began. I wouldn’t be surprised if a similar pattern emerged this time around.”