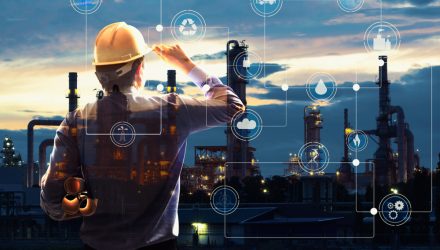 Satellite Imagery Suggests Oil ETFs Are in for a Rough Ride

As satellite imagery provides a glimpse into global oil storage, the picture does not bode well for the crude market and oil-related exchange traded fund.

While recent production cuts have been by “historic amounts” in response to the ongoing global supply glut, Ursa Space Systems analyst Geoffrey Craig warned that the cuts to supply are “a fraction of the decline in demand,” CNBC reports.

“The next catalyst will be inventoried hitting capacity limits. The way you will know that is through satellite imagery because the data isn’t available outside of the U.S.,” Craig told CNBC.

The oil and gas industries have long tapped into companies like Ursa Space Systems, Kayrros, and Orbital Insight that specialize in applications for satellite data.

“We’re looking every week using satellite imagery at tanks all over the world,” Craig added. “What we see in storage matches really well with what you see in seeing price action.”

In the most recent oil market turmoil, problems with storage space for WTI crude at the U.S. hub in Cushing, Oklahoma contributed to the collapse in oil prices, which dipped into the negatives for the first time ever last week.

“We’re already at a price point where the signal to any operator globally is to shut down production,” Kayrros market strategist Ted Hall told CNBC.

U.S. crude production has slowed down in response to the record low prices, dipping to 12.2 million barrels a day last week from 13.1 million barrels a day a month ago, but the cuts still do not match the plunge in demand as broad sectors are shut down to contain the spread of the coronavirus.

“In oil, we expect the market to test global storage capacity in the next 3-4 weeks (WTI was a local event), which will likely create substantial volatility with more spikes to the downside until supply finally equals demand, as with nowhere to store the oil, supply has no other option but to be shut-in down in-line with the expected demand losses,” Goldman Sachs said in a note.