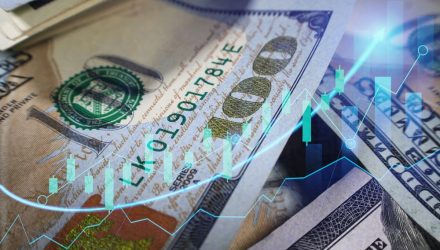 For example, at one point during Thursday’s rout, UVIX registered a 42% return before closing 37% higher, or the most among any ETF industry. It showed an 11-percentage-point lead against the second-best performer for the day, Bloomberg reports.

Volatility-linked ETFs, or those that track the so-called VIX, have become somewhat infamous after February 2018’s “Volmageddon,” but they remain popular plays among aggressive traders trying to capture swift market swings, especially with the added leverage.

“Weeks like this are exactly what this product lives for,” Nate Geraci, founder of advisory firm the ETF Store, tells Bloomberg. “If the wild market swings continue, UVIX will be a hot money magnet. That said, investors should exercise extreme caution with an ETF like this. It’s easy to get quickly and badly scorched.”

Traders have not been scared off by the violent changes in the market. Activity in both leveraged and inverse funds has surged, with retail traders attributed to be a key player behind the trades. SVIX and UVIX already have a combined $55 million in assets after their launch at the end of March, with volumes climbing daily. For instance, UVIX showed a daily volume of around 1.2 million on Monday’s session.

“I am not shocked these two have been successful,” Eric Balchunas, ETF analyst with Bloomberg Intelligence, tells Bloomberg. “Certain investors crave the juice that a 2x VIX ETF can provide despite the many dangers.”

Regulators, though, remain wary of these “complex” products, with the Securities and Exchange Commission and the Financial Industry Regulatory Authority both cogitating on new regulations for such type of products.