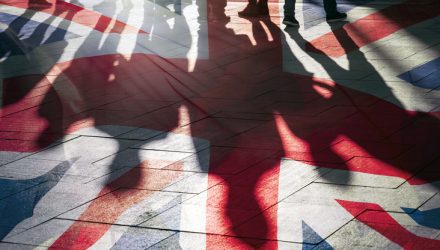 As the Brexit turmoil intensifies, the British pound sterling currency and related exchange traded funds could make an unexpected rally.

The pound was trading around $1.2285 on Tuesday, or a little above its August lows, but it was still down about 17% against the U.S. dollar since the Brexit referendum of June 2016, the Wall Street Journal reports.

The currency has been under pressure from hedge funds and other speculative investors whom have the highest net short positions or bets that the pound will continue to depreciate since April 2017, according to CME Group data.

The recent rebound in the GBP has forced some to exit short positions on the currency or even go long in anticipation of a rally. A perceived softening in attitudes toward a compromise Brexit deal has fuel the sudden positive outlook after U.K. Prime Minister Boris Johnson ’s meetings with French President Emmanuel Macron, German Chancellor Angela Merkel and other EU leaders.

“Some investors we’ve been speaking to, who are short the pound, have closed out that position to lock in profits,” Van Luu, head of currency and fixed income research at Russell Investments, told the WSJ. “That explains how pronounced the movement was when there was a little bit of positive news.”

Some argued that Johnson might lock in a smooth transition out of the EU, putting an end to over three years of political uncertainty and economic turmoil.

“Volatility is too high in the short term to stay short,” Yujiro Goto, a currency strategist at Nomura Holdings Inc., told the WSJ “We’ve had a lot of headlines around Prime Minister Johnson’s meeting with Macron and Merkel. The market reacted quite positively at the suggestion that there could be a compromise.”

Many market observers previously believed that the pound would continue to face troubles if the country quits the European Union on October 31 without a deal in place due to a disruption of the flow of goods and people between the United Kingdom and its biggest trading partner.

If the Brexit process was resolved with minimal disruptions to businesses, “then all of a sudden we have an economy that’s doing relatively well versus the rest of Europe,” Willem Klijnstra, a currency strategist at Legal & General Investment Management, told the WSJ. “If the cliff edge is removed, things look a lot better for sterling than the euro at the moment.”