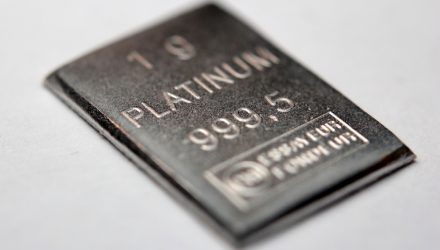 Commodities are on a two-year winning streak over stocks and some market observers believe more upside is in store for commodities in 2023. Count platinum as one that’s starting the new year in an upbeat fashion.

Platinum was a winner last year, topping gold and silver thanks to a stellar fourth-quarter showing and that momentum carried over into 2023. The precious metal’s strong usage case, which includes heavy traditional industry as well as renewable energy among much more, is an important fundamental catalyst for prospective investors to evaluate.

“The metal — believed to be the rarest of all precious metals — is used in the defense and aerospace industries, especially in jet and rocket engines, as well as in the manufacture of detergents, fertilizers, plastics, and explosives. It it is also used in hydrogen fuel cell vehicles, where hydrogen is passed through a platinum catalyst,” reported Weizhen Tan for CNBC.

As is often the case in the commodities complex, supply and demand dynamics are crucial in the platinum equation. The World Platinum Investment Council notes China’s appetite for the metal over the past several years has been voracious, putting some strain on readily available supply.

The Sprott Physical Platinum and Palladium Trust (SPPP) provides exposure to physical holdings of both of those metals, the latter of which is a major component in the production of catalytic converters in automobiles. The  abrdn Standard Platinum Shares ETF (NYSEArca: PPLT), which is also backed by physical platinum, is perhaps the bellwether ETF in this category.

Those exchange traded products stand to benefit if the Federal Reserve eases its pace of interest rate hikes, which would likely stoke downside in the U.S. dollar. Platinum and other commodities are denominated in dollars, making them sensitive to the greenback’s price action.

“Furthermore, a weaker U.S. dollar (DXY) has contributed heavily to rising commodity prices in the last few weeks. The U.S. Federal Reserve is also slowing down its aggressive monetary tightening policy, due to announcing a 50 basis points increase in its last December meeting, a change from the last few 75-basis point hikes. This has also gone a long way in supporting precious metal prices,” according to Capital.com.

For more news, information, and analysis, visit the Alternatives Channel.