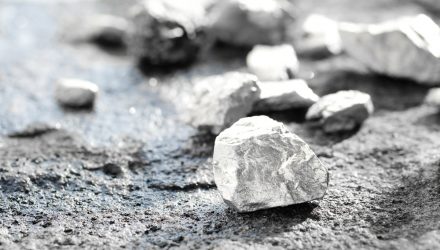 Some data points confirm that investors that missed out on gold’s epic rally this year are finding another precious metal to embrace: platinum. That’s benefiting ETFs such as the  Aberdeen Standard Platinum Shares ETF (NYSEArca: PPLT).

PPLT seeks to reflect the performance of the price of physical platinum, less the expenses of the Trust’s operations, and is designed for investors who want a cost-effective and convenient way to invest in platinum with minimal credit risk.

“Platinum holdings in exchange-traded funds have surged to a record, raising the prospect of a catch-up rally for the precious metal after months of lagging gold and silver,” reports Bloomberg.

“More than 600,000 ounces of platinum have been added to ETFs since mid-May, according to data compiled by Bloomberg, as investor demand partially offsets a drop in consumption from jewelry and the auto industry crippled by the coronavirus pandemic,” reports Bloomberg.

On the demand side, platinum will continue to enjoy robust industrial demand. Additionally, platinum jewelry is starting to enjoy a jump in demand as well, especially among the Millennial generation—younger generations in traditional gold-centric economies like India saw 2017 platinum jewelry sales jump 25%, according to Platinum Guild International

“The buying spree was driven by investors who thought they were missing out on the recent rally in gold and silver, said Nitesh Shah, director of research at WisdomTree. There’s also probably been some money taken as a profit from gold and silver and added into platinum because it’s still relatively cheap compared with its peers, he said,” according to Bloomberg.

A recent cut in production comes in a time when the world is experiencing a shortage of platinum group metals used in catalytic converters used in vehicle exhausts to reduce harmful emissions.

“Investment demand and worries over reduced supply from top producer South Africa after temporary closures of mines due to lockdowns have been supporting the metal,” reports Bloomberg.