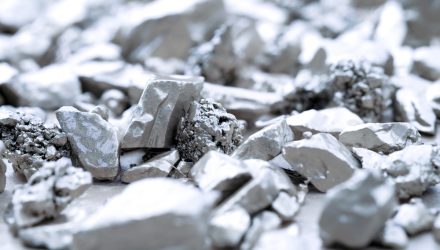 The Aberdeen Standard Platinum Shares ETF (NYSEArca: PPLT) was among the best performing non-leveraged ETFs of Friday, rising 4.2% and breaking back above its long-term trend line at the 200-day simple moving average. Meanwhile, the platinum spot price advanced 4.3% to $904.9 per ounce.

Platinum prices jumped on supply-side concerns after Amplats, the world’s top platinum producer, cut output projections to between 3.3 and 3.8 million ounces of platinum group metals, or 900,000 short of its previous guidance of between 4.2 and 4.7 million ounces, Mining.com reports.

The South African miner’s ACP phase A converter plant at the Waterval smelter complex in Rustenburg was shut down after an explosion in February, and its second converter plant now showed signs of water presence, which is a danger when working with metals at high temperatures.

“This poses a high risk of explosion and the company has determined that it has no other option but to temporarily shut down the phase B unit, to ensure the safety of all employees, and avoid a catastrophic event,” Anglo American Platinum said in the statement.

Consequently, the miner has declared force majeure or an unforeseeable development that prevents one from fulling a contract to customers, suppliers of third-party purchase of concentrate and providers of tolling material.

“The reason we’re stopping is we can’t isolate and detect the source of that water,” Amplats chief executive Chris Griffith admitted on a call after the announcement, the Financial Times reports. “If we have an explosion then we’ll be out for a year with no production from Anglo American Platinum.”

The sudden cut in production comes in a time when the world is experiencing a shortage of platinum group metals used in catalytic converters used in vehicle exhausts to reduce harmful emissions.