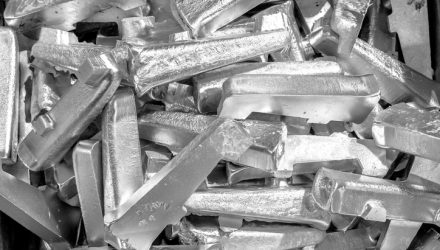 Gold and the related exchange traded funds are performing well while palladium and its ETF are on torrid paces this year, but the Aberdeen Standard Platinum Shares ETF (NYSEArca: PPLT). Some commodities market observers believe that is poised to change.

PPLT is higher by about 1% over the past month and if the platinum ETF adds another 1.25%, it will reclaim its 200-day moving average, a potentially bullish signal. Market observers expect there to be another supply deficit, though small, this year.

“Platinum prices, she says, have ‘turned the corner’ after falling nearly 15% in 2018. Futures prices based on the most-active contracts are trading nearly 4% higher this year. Platinum has been in surplus for six of the past nine years,” according to Barron’s.

Rhona O’Connell, head of market analysis for Europe, Middle East, and Africa, and Asia at INTL FCStone, “expects to see higher prices for platinum next year, possibly in the low- to mid-$900s. With support currently in the $800 region, prices may be looking at a roughly 13% rise over the next 12 months, she says,” reports Barron’s.