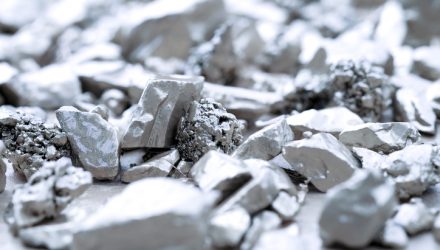 Platinum Could Narrow Gap Against Palladium

Palladium is the most valuable precious metal at the moment, but platinum could narrow the gap against its rival, lifting the Aberdeen Standard Platinum Shares ETF (NYSEArca: PPLT) along the way.

PPLT seeks to reflect the performance of the price of physical platinum, less the expenses of the Trust’s operations and is designed for investors who want a cost-effective and convenient way to invest in platinum with minimal credit risk.

“Palladium will cost on average more than twice as much as platinum this year, but that premium will narrow in 2021 as prices slip from record highs and platinum gains ground,” according to Reuters.

“The sister metals are both used by automakers to reduce harmful vehicle emissions. Platinum is also used to make jewelry,” according to Reuters. “Palladium was once by far the cheaper of the two, but chronic under-supply has pushed prices up by 400% since early 2016, while the over-supplied platinum market has struggled to rise from decade lows.”

With respect to the other precious metals, platinum presents a value proposition for seasoned investors and beginning investors looking to shore up their portfolios with commodities. On the charts, platinum looks healthy, technically speaking, could be poised for some near-term upside.

Related: Precious Metals ETFs Strengthen on a Cautious Outlook Ahead

As for palladium, more upside is expected, too.

“pot palladium this month briefly zoomed above $2,500 for the first time as power outages in top producer South Africa disrupted output, contributing to a supply squeeze,” according to Reuters. “The median forecast returned by 26 analysts and traders this month was for prices to edge down from those levels, averaging $2,000 this year and $1,700 next year. Even if prices trend lower, the two predictions for 2020 and 2021 would be the highest annual averages ever.”