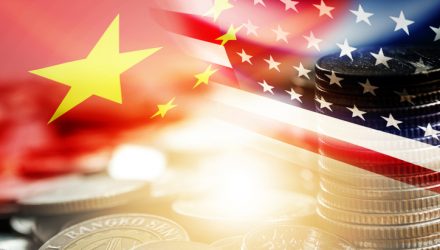 Phase I of a Trade Deal Is Here: What That Means For These Ag ETFs

The U.S. and China finally signed Phase I of a highly anticipated trade deal, which includes a pledge from China to boost purchases of American agricultural commodities, such as corn, soybeans, and wheat.

“The Chinese have pledged to purchase an enormous dollar amount of US agricultural products per year for the next two years,” said Teucrium CEO Sal Gilbertie and portfolio manager Jake Hanley in a recent note. “A commitment of this size can be viewed with skepticism. Yet, even at the low end of expectations, China is committing to purchase a record dollar amount of US agricultural goods in one year.”

Traders were closely watching for more U.S. sales to China after the two countries agreed to a Phase 1 accord in an attempt to ease trade tensions. The protracted trade war previously slowed shipments of soybeans, sorghum, pork, and other agricultural products to China for over a year.

Time To Be Patient

While the likes of CORN, SOYB, and WEAT have recently seen some upside in anticipation of Phase I being signed, Teucrium believes it could take some time for China to live up to its end of the buying agreement.

“As to the question of whether or not China will live up to its agricultural purchase commitments, at current prices, we believe it will take some time for China to achieve the lofty import levels contemplated in the agreement,” said Gilbertie and Hanley. “For 2020 we expect that China will purchase approximately $31 billion of US agricultural products.”

China is really expected in this trade deal to commit to having to buy a lot of agriculture from the US, and corn is right at the top of the list. Plus, historical data indicate corn prices often bounce back early in the year.

SOYB could be a winner this year, but the fund could see a longer-ranging upside if China continues or expand previous buying trends.

“This replenishing of Chinese soybean inventories will create a one-time temporary soy-bean demand surge for U.S. soybeans in 2020,” according to Teucrium. “Long term growth in U.S. soybean exports will result from the continuation of a two-decade trend that has seen China steadily increase soybean imports to feed its vast animal and human populations.”