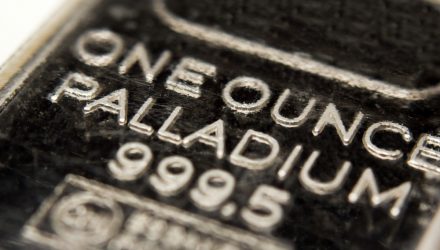 Palladium ETF Surges to Record Despite Slowdown Concerns in China

The palladium ETF rallied Tuesday, with palladium prices hitting record highs, even as the coronavirus outbreak threatens to shutdown carmakers and delay industrial plants in China, the world’s biggest consumer of the precious metal.

The Aberdeen Standard Physical Palladium Shares ETF (NYSEArca: PALL), which seeks to reflect the performance of the price of physical palladium, advanced 6.1% Tuesday while the palladium spot price rose 2.9% to $2,593.8 per ounce.

Meanwhile, the coronavirus outbreak has disrupted normal car production in China as factors were forced to stop operations to curtail the spread of the contagion, the Wall Street Journal reports. For example, Germany’s Volkswagen AG postponed production at some of its Chinese-operated plants until next week as the quarantine of nearly 60 million people limits transportation of both parts and workers.

While the work has diminished short-term demand, palladium prices still jumped to record highs on ongoing supply constraints, with miners producing less of the precious metal.

“It’s the most dysfunctional market I’ve ever seen in my life,” Michael Widmer, an analyst at Bank of America, told the WSJ, adding that car manufacturers could be forced to electrify their vehicle fleets faster than previously planned if palladium keeps getting more expensive.

Palladium demand has surged in recent years as the European Union and China implemented stricter car emission standards, amid concerns over the impact of certain pollutants on public health. Consequently, palladium, which applied to catalytic converters that are fitted to gasoline-driven cars, is in high demand as a highly effective way to convert toxic gases like carbon monoxide into substances that are less toxic to inhale.

Almost all gasoline cars manufactured in China this year will be held to the new emissions standards, or up from two-thirds in 2019. Consequently, U.K.’s Johnson Matthey calculated that this will increase the average amount of palladium required in each catalyst and could lift global demand for the precious metal in the auto sector above 10 million ounces.

On the other hand, supply has not been as quick to meet the rise in demand. Palladium is typically produced as a byproduct of palladium, and miners don’t want to inundate the weak platinum market with even more supply.