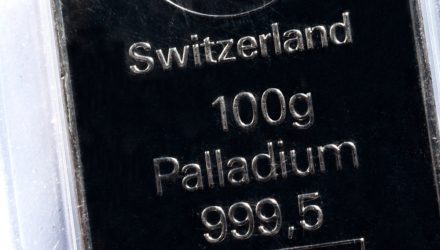 Palladium-related exchange traded funds rallied on Wednesday as the traders began to doubt the progress in peace talks between Russia and Ukraine.

The abrdn Standard Physical Palladium Shares ETF (NYSEArca: PALL) jumped 5.4% on Thursday, testing its long-term resistance at the 200-day simple moving average. Meanwhile, the palladium spot price was up 4.4% to $2,253.9 per ounce.

On Wednesday, investors were digesting the increasing skepticism over peace talks between Russia and Ukraine, the Wall Street Journal reports.

“Hopes were a lot higher yesterday that there could be a breakthrough in the talks, but I think those hopes have faded away,” Susannah Streeter, senior investment and markets analyst at Hargreaves Lansdown, told the WSJ. “I think [markets] are going to continue to be pretty volatile.”

Russia is a key palladium producer, accounting for 40% of all mined production. The precious metal is largely used in catalytic converters in automobiles to reduce harmful greenhouse gas emissions, and supplies are almost always transported by passenger planes, which have been cut off from many Western countries due to sanctions.

Palladium prices have been retreating on hopes of peace talks between Russia and Ukraine, but Moscow’s actions are making investors take a second look.

“Nobody should be fooling ourselves by the Kremlin’s now recent claim that it will suddenly just reduce military attacks near Kyiv, or any reports that it’s going to withdraw all its forces,” Defense Department spokesman John Kirby said at a press briefing. Kirby added that while “the Pentagon has seen a small number of Russian troops leaving Kyiv in recent days,” it assesses that these movements are reflective of a “repositioning, not a major withdrawal.”

“We all should be prepared to watch for a major offensive against other areas of Ukraine,” Kirby said, noting that the Pentagon has also recently seen “clear indications” that Russian forces are focusing on the Donbas region in eastern Ukraine.

Moscow also dismissed an olive branch from Ukraine in peace talks, while Russian forces continued to strike around Kyiv despite previously stating that they would limit operations in the area. Russia also increased ground and air assaults in eastern portions of the country, the Wall Street Journal reports.