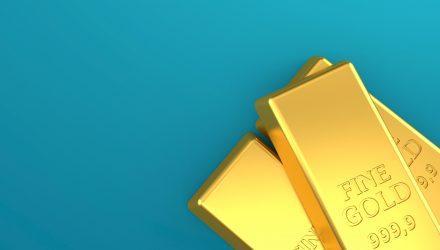 Amid increased market turmoil caused by the U.S. forging ahead with trade tariffs on several major trading partners, gold and the related exchange traded funds are getting a lift, prompting some options traders to target bullion-backed ETFs such as the SPDR Gold Shares (NYSEArca: GLD) and SPDR Gold MiniShares (NYSEArca: GLDM).

GLD, the world’s largest gold ETF, surged 2.43% in May as bullion topped $1,300 per ounce late in the month. Against the current backdrop of the U.S. trade war with China, the fear and uncertainty that accompany the rampant volatility, and the worst May selloff for stocks in 50 years now, gold prices will continue to rise this year, according to one financial executive.

“GLD is up 1.2% to trade at $123.20, pacing for its highest close since mid-April. In the fund’s options pits, roughly 87,300 calls and 65,300 puts are on the tape, double the expected intraday amount. The August 127 call has seen the most activity, though it’s not clear if positions are being opened or closed here,” according to Schaeffer’s Investment Research.

“It does seem that speculators are purchasing new positions at the weekly 6/7 122.50-strike put for a volume weighted average price of $0.40. If this is the case, breakeven for the put buyers at the close next Friday, June 7 — when the weekly series expires — is $122.10 (strike less premium paid),” according to Schaeffer’s.

Just this month, investors have added nearly $685 million to GLD.