You are at:Home»Alternatives Channel»One of the Few ETFs Working in a Brutal Environment 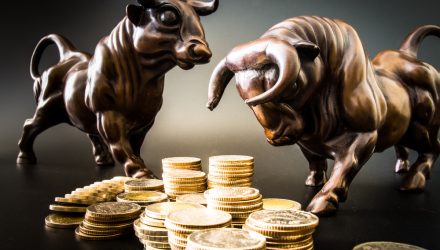 One of the Few ETFs Working in a Brutal Environment

It’s not surprising that a time when safe-haven assets are in style in a big way that ETFs focusing on the U.S. dollar are thriving. Just a handful of ETFs hit all-time highs on Wednesday and one of them was the  WisdomTree Bloomberg U.S. Dollar Bullish Fund (NYSEArca: USDU).

Strength in the dollar comes after the Federal Reserve earlier this week cut interest rates to near zero. The Fed said it coordinated with five other central banks to make U.S. dollars available overseas at near-zero interest rates through the so-called swap lines program, diminishing the strains in the offshore market for dollar funding. To encourage overseas banks to finance in dollars through these swap lines, the Fed will lower the interest rate by a quarter of a percentage point and it will extend the maximum length of time in which banks can borrow to 84 days from one week.

Part of USDU’s advantage in the current climate is its exposure to short position in emerging markets currencies, an asset class that has been obliterated by the spread of the coronavirus.

The U.S. central bank has often set the precedent on how other central banks around the world react, but even the most observant market analysts are unsure of what lies ahead. More than likely, the Fed will keep its scissors sharpened.

USDU offers investors a broad, dynamic, and effective way of gaining exposure to the U.S. dollar against a basket of foreign currencies in an ETF structure.

USDU’s primary rival is the Invesco DB US Dollar Bullish (NYSEArca: UUP), which also hit an all-time high on Wednesday.