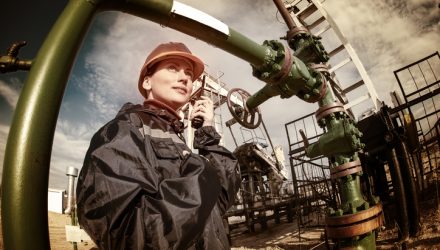 Once Again, It’s About OPEC For Oil ETFs

The United States Oil Fund (NYSEArca: USO), which tracks West Texas Intermediate crude oil futures, struggled early in the third quarter with oil prices residing near where they did in the first quarter.

Investors considering USO or other oil exchange traded products have several factors to consider including the Organization of Petroleum Exporting Countries (OPEC).

“OPEC and non-OPEC producers, known as the OPEC+ alliance, agreed to continue reducing output by 1.2 million barrels a day from late 2018 levels through March 2020, due to a downward revision in 2019 world oil demand,” reports Myra Saefong for Barron’s.

What’s Next For Oil

“U.S. benchmark West Texas Intermediate crude fell over 16% in May as the trade dispute heated up,” according to Barron’s. “It rebounded by just over half that in June as U.S.-Iran relations worsened, raising the prospect of supply disruptions. WTI futures edged up to $57.34 a barrel on Wednesday, after ending on Tuesday at a two-week low.”

For USO, the fund remains higher by nearly 22% year-to-date even after plunging in May as global trade tensions took hold of riskier assets.

Some oil market observers believe if the U.S. and China can truly produce a workable trade accord for the world’s two largest economies, demand would be sufficient to carry crude back to $75 per barrel.