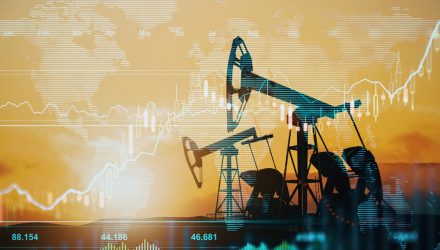 Oil-related exchange traded funds had another rough week, with crude oil prices marking their worst weekly drop in over 10 years, after the Biden administration and International Energy Agency countries resolved to release stockpiles from their emergency fuel reserves.

WTI crude oil futures declined over $14 this week, the most since 2011, and dipped back below $100 per barrel on Friday, Bloomberg reports.

Crude oil markets retreated Friday after the U.S. planned to release 1 million barrels per day for the next six months.

Furthermore, IEA nations agreed to release a round of crude oil stockpiles but did not state a specific number. President Joe Biden anticipates that allies will release an additional 30 million to 50 million barrels ahead.

“Russia’s war in Ukraine continues to put significant strains on global oil markets,” the IEA said in a statement. “This is taking place against a backdrop of commercial inventories that are at their lowest level since 2014 and a limited ability of oil producers to provide additional supply in the short term.”

Citigroup Inc. noted that the U.S. will likely deliver on the promised volumes, despite having never taken out that much oil from the reserve stockpiles.

Goldman Sachs Group Inc. readjusted its price forecasts on crude oil for the year but still raised its estimate for 2023, arguing that this short-term move won’t affect a longer-term supply problem.

“The market is short about 2 million barrels a day, if not more, from Russian supplies into the global market,” Amos Hochstein, the U.S. State Department’s senior energy security advisor, told Bloomberg.