You are at:Home»Alternatives Channel»Oil ETFs Extend December Gains as Pros Load up on Futures 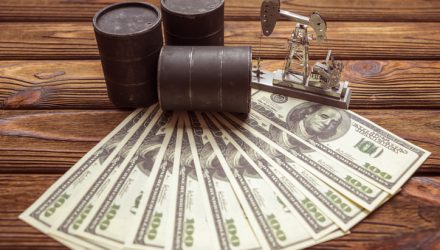 USO and BNO were helped higher by the recent commitment of traders data, which indicates professional speculators are increasing long bets on oil futures contracts.

Crude oil has strengthened more than 11% this month after the Organization of Petroleum Exporting Countries and allied producers like Russian agreed to cut output, along with hopes of an improving global economic outlook as the U.S.-China trade dispute moved toward a resolution.

“The improved outlook for trade and OPEC’s pledge to deepen output cuts are helping U.S. oil head for a rebound of more than 30% this year, its best performance since 2016. That’s after a 25% slump in 2018,” reports Bloomberg. “It also seems that America’s shale boom is slowing down and several forecasts for the country’s crude output next year have been lowered.”

Oil ETFs, such as USO and BNO, could be supported in 2020 if shale producers, lower output in an effort to conserve capital.