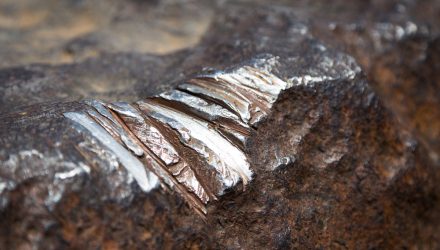 A nickel exchange traded note has plunged with the Russia-Ukraine war revealing the cracks in this segment of the industrial metals market.

The iPath Series B Bloomberg Nickel Subindex Total Return ETN (NYSEArca: JJN) was down 4.9% on Friday and declined about 50% since its highs earlier in the month.

Nickel prices have been in free fall with declines hitting daily limits introduced this week by the London Metal Exchange, Bloomberg reports.

While several observers warned that the market could unfreeze and trade at around $30,000 per ton or more in line with prices on the Shanghai Futures Exchange, the target price would still be 19% below the price where nickel for delivery in three months is being traded on the LME.

Some warned that prices have further to fall. With no contracts traded since the LME reopened on Wednesday, the exchange’s backlog on Friday morning revealed 10,000 sell orders at the limit-down price of $36,915.

“With a massive 60,000 tons of longs scrambling for the exit without any takers we don’t see LME catching a bid until at least $25,000 or below,” Anant Jatia, chief investment officer at Greenland Investment Management, told Bloomberg.

LME’s orderbook shows that “most longs just want out of this contract,” Marex’s Alastair Munro said in a note.

The LME, where metals have traded for 145, failed to recognize the exposed risks. The exchange dragged its feet when nickel trading plunged out of control on March 7 and suspended the market, wiping out $3.9 billion in transactions in the following morning session and enraging those that bet on a rise in prices, the Wall Street Journal reports.

The blowup in the nickel market can be traced to Tsingshan Holding Group. The Chinese nickel maker that owed banks and brokers $4.5 billion for margin payments related to its trade after the LME scrapped trade orders on March 8.

If the London Metal Exchange did not cancel hours worth of trades that day and allowed prices at over $100,000 per metric ton, Tsingshan would have been on the hook for an estimated $15 billion due to its big short position that was exposed to the sudden short squeeze on the heels of a surge in prices following the war between Russia and Ukraine.

The LME “has been asleep at the wheel,” Andrew Mitchell, director of nickel research at Wood Mackenzie, a consulting firm, told the WSJ. “It got to a point where there were things going on which were not normal market forces.”