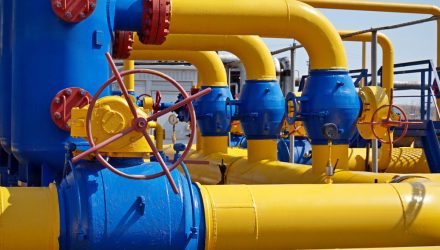 Natural gas prices and related ETFs surged Monday on a notably hotter weather forecast outlook and an increase in liquefied natural gas export demand for the first month in six.

Natural gas prices have collapsed this year as the coronavirus pandemic shutdown economies and drastically diminished demand for the fuel, with LNG buyers around the world canceling over 100 U.S. cargoes, Reuters reports.

Even before the Covid-19 pandemic hit, global gas prices were already depressed by a flood of increased supply after a record number of export terminals entered into service in 2019 Meanwhile, winters across Europe and Asia were warmer than normal, weighing on demand.

Pipeline gas flowing to U.S. LNG plants now average 4.0 billion cubic feet per day, or 41% utilization, so far in August, according to Refinitiv data. LNG exports on pace for their first monthly gain since hitting a record high in February. In comparison, utilization was about 90% in 2019.

“Recently, a Bloomberg survey of traders found that up to 45 cargo cancellations are expected for the month of August, down from roughly 50 for the month prior,” Genscape analyst Preston Fussee-Durham said, according to Natural Gas Intelligence.

“This week remains anomalously cool, especially from the Midwest into the mid-South, and we also have rain/wind issues along the East Coast the next couple of days as Isaias moves up the coast,” Bespoke said. However, “by early next week, heat rebuilds from the Plains over to the Midwest and into the Northeast.

“The South holds closer to normal, similar to the predominant pattern seen much of summer to date. The tropics settled down after Isaias, but we still expect plenty more activity over the next several weeks.”