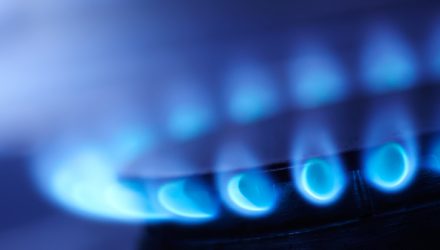 Natural Gas ETFs Heat Up Ahead of Cold Weather Forecasts

The United States Natural Gas Fund (NYSEArca: UNG) increased 4.1% on Monday with Nymex natural gas futures up 4.0% to around $2.82 per million British thermal units, their highest level since late March. UNG also broke above its long-term resistance at the 200-day simple moving average.

“It is all about the temperature forecasts with this market,” Jim Ritterbusch, president of energy advisory firm Ritterbusch & Associates, said in a note, according to the Wall Street Journal.

Cold weather tends to support demand and prices as more people burn fuel to fight off the winter chill. Weekend forecasts showed cooler-than-expected temperatures in the coming days and weeks, bolstering natural gas on the expected increased heating demand ahead.

While natural gas prices have rebounded from this year’s earlier lows, the natgas market is still down for the year and well below levels for the same time last year. In November 2018, prices climbed to near $5 when analysts warned of an unusual supply deficit.

However, record U.S. production so far this year has reversed the bullish sentiment from 2018, pushing up inventories and adding to speculation of continued pressure in natural gas prices.

Analysts, though, argued that the excessive bearish bets could exacerbate bullish prices as traders unwind their short positions and buy into a rally. Hedge funds and other speculative investors have already shifted into a slightly less bearish stance, pushing down net bets on lower natural-gas prices for the week ended October 29, but bearish bets far exceeded bullish positions.

Natural gas supplies remain robust. According to Energy Information Administration figures through October 25, U.S. stockpiles were still 18% above levels from for same time last year and hovered above their five-year average levels