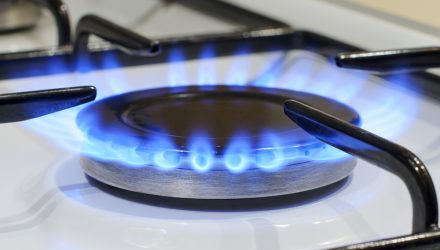 Natural gas exchange traded funds were among the better-performing areas of the market on Monday as natgas prices rebounded from the heavy selling last week as analysts highlighted supportive fundamentals.

“Wind generation, however, which dropped sharply over the weekend and remains weak today, is expected to rebound tomorrow, constraining prices at Henry Hub,” the EBW analysts said.

The analysts argued that with peak summer demand most likely passed, the market is positioning itself for the end of the season, so prices could come under downward pressure near-term.

“Over the next few days continued selling pressure is possible,” the EBW analysts added. “Given the current storage trajectory, support is likely to hold soon. Precisely when and where gas prices will bottom out is difficult to predict.”

Looking at weather forecasts, Bespoke Weather Services has made no major changes to its latest 15-day forecast models, but it did estimate a few days of near-normal gas-weighted degree day totals expected for the end of the month.

“This may be temporary, however, as the atmosphere remains in a La Nina base state, which correlates to above normal heat more often than not as we move through the back half of the summer season,” according to Bespoke Weather Services. “We still see a solid period of above normal heat from later this week into the start of next week, driven by hotter than normal conditions in the Midwest and East, though not as strong as last week’s heat.”

Based on the recent price moves in the natural gas markets, Bespoke argued that the early bounce “makes sense” since the low $3.80s represents “a solid technical support level…Should data continue to show re-tightening of balances, we could easily push back toward the $4 level as the week moves along, pending cash prices.”